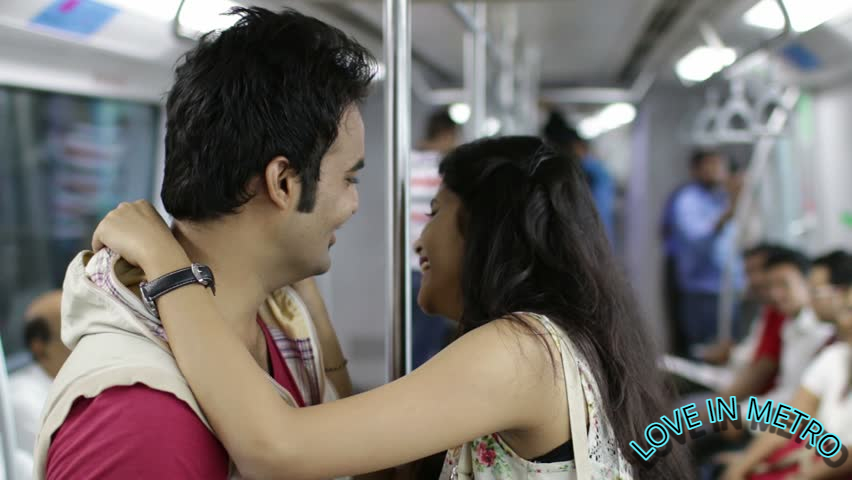 Naseer say “hello” and asked her name. girl was silent some time. Naseer speak if you don’t want to tell me then “it’s ok”. I see you everyday at this time in this metro. Naseer said now speak your name too. girl tell her name Najma and do work in IT at Chandni Chowk. There is a lot of talk between them on that day. Then both go to their offices. LOVE IN METRO Similarly, both kept coming and going in the metro and both kept talking to each other, after spending a few days Najma used to wait for Naseer at the metro station in the evening, then after that both used to go to their respective rooms. One day Naseer asks about Najma’s family, Najma says that someone brutally killed her family for land and house. LOVE IN METRO

that’s heard Naseer was very sad And speak, How sad it is that how does someone take someone’s life for the sake of land and house? Naseer, you remember your mother and father a lot, Najma yes, she starts crying by speaking. Naseer says sorry and says, I have refreshed your old memories. After speaking, he leaves from there. LOVE IN METRO

Now Naseer was falling in love with Najma, Naseer fell in love with Najma and started loving her like crazy. Najma also want to Naseer but couldn’t speak. after that they going office together and come together. when was holiday of office they go to see movie in theater. but Naseer couldn’t speak I love you ‘ to Najma. Naseer give a beautiful gift on Najma’s birthday. Najma was very happy. Najma also loves with Naseer. she want that first time Naseer speak ” I love you” LOVE IN METRO But Naseer was afraid of one thing that what would he do if he came to know about the truth. This always scared him and he did not dare to say I love you. One day a very sad incident happens, when Najma was going to the metro station, someone pulled the chain around her neck and Najma pushed her from behind, Najma fall down on a pole, she started bleeding profusely from her head. Some people admit Najma to the hospital and call Naseer from Najma’s phone. Naseer reaches the hospital immediately and saw Najma.

There was need of blood for Najma’s operation, Naseer give his blood and say to sister, Who gave blood to Najma should never be known. After a few days, Najma becomes right and both the offices started coming by metro. Naseer was loved very much to Najma. But he did not dare to say I love you. Naseer agrees to tell everything about himself to Najma on his birthday. he probably does not know Najma from the front, so he writes a letter and packs it in a nice gift. LOVE IN METRO

Najma starts coming home from the metro with a gift, she does not know what the gift is, when she opens the gift and sees it, there is a letter in it and it is written in it, Dear Najma, today I am going to tell you a very sad story in which I am (either or not) and you are there and our mother and father are also there Najma, you always used to ask who are our mother and father? Tell you that we are their sons who killed your father. He is still alive but I am for him and he is dead for me. LOVE IN METRO

I have left them and their wealth long ago, I know who you are Najma, you are the daughter of my Kahala, my father had killed your father and got all his land and property in his name. You also know all this, but after knowing all this, you will be able to forgive much. Probably not, I wanted to tell you all this long ago but I didn’t know because I knew that you can only hate me and my family, no love, I also know that you want to kill me and my family. You can go to any extent for this. All this is a matter between two families. But Najma truth is “I love you very much” I love you. if you forgive me then you meet me in park at 9 O’ Clock. I switch my mobile. we meet tomorrow  directly in park, I love you. Najma cries a lot while reading the letter, suddenly she remembers that I have not eaten anything like Aloo Paratha. Najma immediately calls up but Naseer’s mobile is switched off. She gets down from the metro station and immediately takes a taxi and goes to Naseer’s house and sees that Naseer is lying on the floor, blood is coming out of his mouth. LOVE IN METRO

She immediately takes him to the hospital, but the poison had reached his whole body, the doctor and the nurse together could not save him, a nurse says that he saved your life by giving his blood and refused to tell you this. This is the heart of the sad love story, Najma regrets her actions and cried a lot. LOVE IN METRO | VERY SAD LOVE STORY IN ENGLISH – 2022